This discretionary trading setup is used by Smart Trader. I have formally decided to give it a name and try to define it in one blog article. The below information would be available in Smart Trader’s market updates and comments section. I have added my thoughts and perspective to it where ever required. I feel the frequently asked questions format would explain this concept nicely.
What is price action and how does it unfold?
Price action is simply how prices change. The actions and reactions of market participants impact the direction, speed of movement, duration and intensity of the market.

Are markets truly random in Behavior?
The Bad news is market are random most of the time. The good news is when markets are not random it gives the trader a edge. This edge will not endure for long and markets will return to their random behavior.

How do you figure out  that there is a imbalance in supply and demand?
When ever price gets rejected at a level and forms an extreme it is a sign of imbalance. Price acceptance is when price keeps moving above and below price levels aimlessly this is a sign of random behavior.

Now that the Trader has understood the market mode what tactics will he use to profit out of this understanding?
If market is in trending mode a trader should look for Breakout Pullback at Decision Points and when the market is in mean reverting mode a trader should look for Break out failure at Decision Points. There are subtle variations of both these setups which is listed in the back tested data on Smart Trader website.

What is a Decision Point?
Decision points are price levels where the market strongly reacted earlier. Most of the time they are proven price levels.But market will always create  new Decision Point levels.  Traders are creatures of habit and you can expect them to react at these price levels again.

Is there any other Decision Points other than those mentioned above that could be important?
After market opens at some point in time it creates its first balance area where price trade in a range for a minimum duration of 30 minutes. This is an initial range and the high and low of this initial range is a Decision Point. 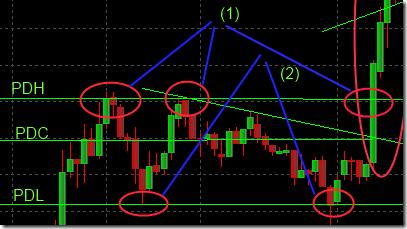 In this price chart there were three Decision Points
PDH: Previous Day High this behaved like a Decision Point as a move towards it was rejected. When price moved above it then there was no pullback.
PDC: Previous Day Close this did not behave like a Decision Point and price was accepted and moved like a Barbed wire around it.
PDL: Previous Day Low this also behaves like a Decision Point there was a break out above this level and price moved away from it. And every pullback to it was rejected and price moved in the opposite direction.
What is the first step in a trade setup?
The first step is always to find the bias of the market as the price action unfolds. A big body green candle with volume higher than usual is an indication of bullish bias. Similarly a big body red candle with volume higher than usual is an indication of bearish bias. A bunch of small body candles with low volume signifies no trend. There are many other ways to determine the bias of the day. Listing it out here is beyond the scope of this article.

Are there any Decision Point setups to trade in non trending markets?
When market is trading in tight trading range for a duration of more than one hour and with low volumes. The Break out failure trade leads to a powerful move in the opposite direction. But very important when price moves away from a tight trading range. One must position for a trade entry after first break out in the direction of the break out. If this trade fails and market moves below the other side of the range. Reverse the trade without hesitation. The Reward to Risk ratio of this setup is very high. The stop loss is limited to the width of the range but target would be multiples of this. Break out failure is a “Counter Trend Trade”.

Is Break out pullback in a trending market and Break out failure in a non trending market the only Decision point trading setup?
Not exactly there are countless variations on how to accurately identify and locate trade entries. Please go through the Smart Trader website to figure out different possibilities.

Why Decision Point Trading is a setup and not a strategy?
A Set-Up is the condition or set of conditions that are necessary prior to considering taking a position in the market or closing a position in the market. Traders have to be aware that the set-ups are only part of the equation. The strategy that one uses on these setups define the extent of your profit and loss. To create a trading strategy, many things must be considered like return, risk, volatility, timeframe, style, correlation with the markets, methods, etc.

Could an example of a popular trading strategy be provided?
VWAP is Volume Weighted Average Price.VWAP trading strategy and different variations of it are used by traders. One trade that has worked very well is If there is a move in the last hour of trade which continues to move away from the VWAP with high volumes then the market will continue to move in a direction that increases the gap between the VWAP and current market price.

Is it possible that on some trading day’s Decision Points prove to be in-effective?
It is definitely possible for example in a soft trend day where the market moves only in one direction and there is no price rejection. The market could have made a big move but as there was no price rejection. This setup will not give any trade entries. Also in a price spike and channel type of pattern will give plenty of false signals.

How to hone trading skills and increase the probability of success using Decision Point trading setup?
There is a tremendous difference understanding patterns and execution. Only through repeated exposure will one develop the subtleties of the price action. Practice with at least 100 charts bar by bar. Amibroker has bar by bar re play of previous intraday price action. Make elaborate notes while observing this. I am not recommending that you buy Amibroker but a replay feature is good feature to hone your skills.

Why is this titled as a Decision Point Trading Setup for Nifty Future?
The reason for this is that Smart Trader has provided the back tested results for this setup on Nifty Future from January 2012 in his blog.

How Long have I been using this Decision Point Trading Setup?
I have been using it for a week and it has helped me locate good trading setups. I have not back tested it beyond a week but I am clear about the concept.

If this is not my trading setup then why am I promoting it?
I was a software programmer prior to trading and It gave me great satisfaction to contribute to open source software projects that had helped me. In keeping with this tradition I am updating my blog with my perspective on Decision Point Trading setup.

What role do Technical Analysis indicators and price pattern signals play when using the Decision point setup for intraday trading?
My Personal opinion is that Technical Indicators are not to be used in Intraday trading time frame. Adopt minimalism and keep your trading screen clutter free. Also price pattern of less than 30 min duration are completely meaningless. The longer the price pattern plays out stronger is the signal.

What would be the single important thing that a trader should do?
A trader should position himself in the direction of the net order flow. This is the imbalance between supply and demand. Once a news based event has occurred. Ignore the news and focus on the price action.  News flow may be good or bad but more important is how the market reacts to it.
Posted by Ramesh Ramachandran at 8:48 PM